THE FUTURIST! has never participated in a blog-a-thon before ...there was the intention of making an entry in last November's Boris Karloff Blog-a-thon, but Life interrupted those plans and the will to transcribe something on the actor had faded away.

News of the John Williams Blog-a-thon at EDWARD COPELAND ON FILM was transmitted to THE FUTURIST! around the beginning of last week. This brought to mind all of the vinyl records he had stored away in his closet of memories. As a young lad, THE FUTURIST! collected more recordings of movie soundtracks than any other type of music. The collection consists mostly of Jerry Goldsmith and the subject of this blog-a-thon John Williams. THE FUTURIST! always, he must admit, admired Goldsmith more for his musical movie architecture. He always did find Williams stirring and very much evident as another character in the film he was watching. However, he could always hear familiar sounds and strains in Williams' scores ... it was as if a certain classical piece was about to start that THE FUTURIST! had heard before ... ghostly strains of music, he felt, influenced Williams which he then borrowed and elaborated on in some way.

This was very evident to THE FUTURIST! in the John Williams score to the Mark Rydell film THE COWBOYS from 1972. This was a film that THE YOUNG FUTURIST! watched on his friend Kevin's very large television one weekend night. THE FUTURIST!, as a lad, had always loved 3 things in films ... Fred Astaire, private detective movies and westerns. As he grew older, his tastes widened with more viewing, but he has never stopped loving that triad of initial cinema attractions. 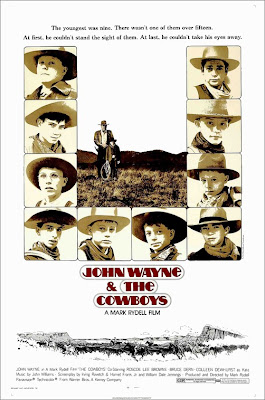 THE COWBOYS presented a much anticipated viewing experience for THE YOUNG FUTURIST!. It was a western, of course, but its story line dealt with young boys, some teens, that are recruited to aid an aged rancher in transporting a herd of cattle from Montana to South Dakota. The inclusion of young boys as supporting characters created a cinematic kinship, of sorts, for THE YOUNG FUTURIST!. The rancher was portrayed by the iconic John Wayne. Wayne was an old man at this time and his presence brought a sense of sadness to THE YOUNG FUTURIST!. Wayne was still an imposing Father-like figure, strong and a moral symbol of heroics and no nonsense attitude, but his age and the tempo and subject matter of these westerns, of the 1970s, sent a tingle through the body that the West (or western) was at its end. The plot of THE COWBOYS reaches a dramatic climax that enforces this sense of finality ... a climax that emotionally affected THE YOUNG FUTURIST! and his friend that weekend evening.

The emotions felt were further enhanced by the score to the film by Williams. As related earlier, THE FUTURIST! always felt he could hear "other people's" music in Williams' scores. This occurs in THE COWBOYS, as well. You almost think you are about to hear an Aaron Copland piece and there is are waves of Jerome Moross' score to THE BIG COUNTRY that ebb and flow through your memory. Nevertheless, the familiarity does not lessen the wonderful ambiance of a classic western sound. It stirred THE YOUNG FUTURIST! with it's aural sense of wide sunny vistas and open spaces ... and then it softens to a wistful sound of passing and sadness, before it returns to its main theme. It takes the western theme of bravado and manliness and mixes it with emotional sensitivity. And that is the very idea of the film.

THE FUTURIST! may enjoy other composers even more than John Williams, but it is evident to him that it was and still is the Williams scores that will evoke past emotive experiences in the dark ... emotions that brought tears and happiness. Even to this day, the overture to THE COWBOYS brings back that first night of seeing the film ... the danger felt as the youngsters and Wayne accompanied their cargo as ruthless murderous men followed them, the perception of the death of the West as movies portrayed the "West", the idea of what it meant to be "a man".

That night, two boys watched the moving images of youngsters become men as a result of tragedy. Turning his head to not allow his young friend to see his tears in fear of being ridiculed for his emotion, THE YOUNG FUTURIST! could see that his companion had reacted similarly. No words were said ... no abuse hurled ... just the electrical feeling of a film's power to affect a viewer. All due to the magic of a film story and it's partner in sensory immersion ... music.

Very good. You're right, it is quite reminiscent of The Big Country in parts.

THE FUTURIST!
Utter Despair, N.J., United States
He just wants to love something.

RECENT SHOWINGS AT THE THIMBLE THEATER or AT THE HIVE MEGAPLEX